At the Last Supper after Jesus changed bread and wine into His Body and Blood, He told His apostles to Do this in memory of Me.

This they did. As His apostles and disciples brought the Gospel to different parts of the world, they incorporated significant customs and music of that people with basic liturgical practice to form liturgical traditions. In the end, four great centers of Christianity emerged with distinctive Christian liturgical traditions and customs, but sharing the same Faith.

These centers were located in the great cities of Jerusalem, Antioch, Rome and Alexandria. A couple of centuries later when the capital of the Roman Empire was moved from Rome to the eastern city of Byzantium—renamed Constantinople—an adaptation of the Antiochian Liturgy emerged there, influenced by the richness and pomp of the imperial court.

Thus a new center of Christianity arose in Constantinople and her ritual became known as the Byzantine Rite. From Constantinople the great missionaries, Cyril and Methodius, were sent to convert the Slavic peoples of Eastern Europe. Today the Byzantine Rite is divided into church jurisdictions by ethnic groupings, e.g., Greek, Ruthenian, Ukrainian, Serbian, Russian, etc.

Our Church jurisdiction is that of the Ruthenians. Our ancestors came originally from the land at the foot of the Carpathian Mountains in what is now the southern Ukraine. From there our ancestors migrated to Slovakia, Hungary, Romania, and Croatia. Towards the end of the 1800’s many also migrated to the United States settling mainly in Pennsylvania, New Jersey and Ohio where many worked in the coal mines.

Since the Church was an integral part of their life, they brought their priests and traditions with them. Many times they mortgaged their own homes to build their churches. In 1924 a separate, single ecclesiastical jurisdiction for the United States was organized.  From this the Byzantine Catholic Metropolitan Church sui juris of Pittsburgh, with suffragan Bishops in Passaic and Parma, was established forty-five years later.

Through intermarriage and an attraction for Eastern spirituality, many more people have joined or transferred to our Church. Because of this, our Church in the United States became known as the Byzantine Catholic Church to reflect that it is not an ethnic Church per se, but one that is open to all peoples!

After World War II, many Eastern Catholics moved to the Western United States. In spite of the fact that we are few in number and scattered all over the Western States, Pope John Paul II gave permission for the establishment of the Eparchy (Diocese) of Van Nuys in 1982 as a canonical part of the Pittsburgh Metropolia, the Eparchy was renamed to the Holy Protection of Mary Byzantine Catholic Eparchy of Phoenix in 2010.

Daily Liturgy: WE ARE CELEBRATING LITURGY IN THE CHURCH. COMMUNION CONTINUES TO BE OFFERED ON A DISPOSABLE WOODEN SPOON. LITURGY WILL BE STREAMED AT 9 A.M.

Sunday Liturgy:  WE ARE CELEBRATING LITURGY IN THE CHURCH.  COMMUNION CONTINUES TO BE OFFERED ON A DISPOSABLE WOODEN SPOON. LITURGY WILL BE STREAMED AT 10 A.M.

Sacrament of  Reconciliation (Confession): CONFESSIONS ARE AVAILABLE HALF AN HOUR AND UP TO 10 MINUTES BEFORE DIVINE LITURGY – CONFESSIONS ARE HEARD IN THE CHAPEL, NEXT TO THE GIFT SHOP. 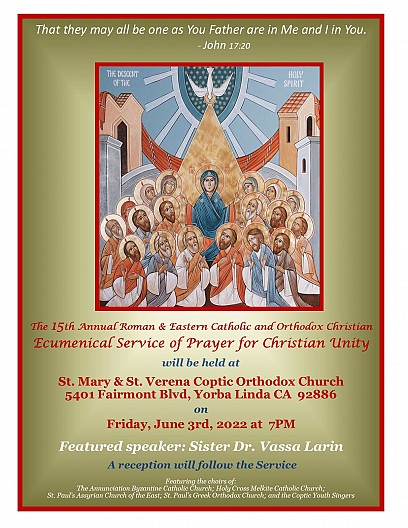 Remembering Msgr. George Vida on the one-year anniversary of his passing. Blessed Repose and Eternal Memory!